The Livers of Ween Hollow adore the spooky times of Halloween, and celebrate for a whole month leading up to it. It’s Tin’s first Halloween, and he’s been entrusted to assist in the preparations. Little does he know, there are dangers lurking about, ready to threaten the festivities!

As you wander around Ween Hollow, you'll notice the very ground you walk on is made of chocolate, or at least it looks like it is (but don't try eating it). Residents and old friends are dressed up for the occasion, even though some are already monsters. There are many fall trees with pretty orange leaves scattered around. The night sky is beautiful and starry, with colorful moonlight illuminating the land. This peace is thanks to Meen, Watcher of the Moon, who resides at the center of Ween Hollow. Her residents like to call her the "Queen of Halloween", and she is the one Tin will report to.

-Wander around the whole Plaza, and talk to strangers and friends alike

-Skill trees for all 4 playable characters

-4 Nights, each with their own random events

-Explore every area in the Wor-E-Woods, and face off against two bosses

-An ending based on the quality of the Plaza Pot

-Put sweets in the Plaza Pot for better festivities, or eat them for permanent stat boosts.

-There are a bunch of Ween Hollow specialties, like Fruitee Cubes, Choco Bricks, and Sugar Peppers.

-There are 3 tasks that you can do each night. ‘Search’ lets you run through a big area, finding sweets and battling monsters for more sweets. ‘Defend’ is purely focused on fighting and leveling up your characters. ‘Harvest’ is a quick way to gather a couple of uncommon sweets.

(Which Moon will shine down?)

-The game is short, but each playthrough can be different in certain ways.

-Sweet Moon: Chase around floating baskets of candy in a special mini-game!

-Blood Moon: There can be sudden enemy attacks on the plaza. Failure means it’s Game Over! You may have to really put your combat skills to the test against the feared Deathlies, who want to do more than just disrupt the celebrations.

-There is a huge cast of characters, both old and new, dressed for the occasion. Playable characters even have new skills based on their costumes!

-Skill trees have variations on certain skills. Moon Apples used for enhancements are very rare, so power up only your favorite skills.

I had a lot of fun! A great halloween-inspired game!

This was super fun to play.  The theme park reminds me of Chrono Trigger's beginning.  I especially liked the Defense mode so you can level up  :)

Thanks so much! Yep, the Defense mode is perfect for powering up the characters, and earning LiverBucks! 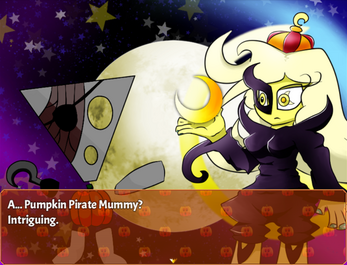 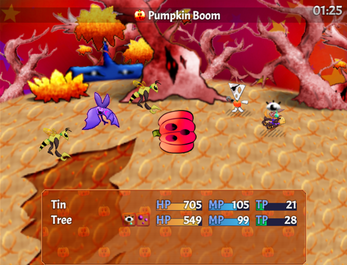 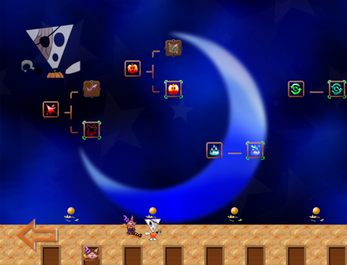 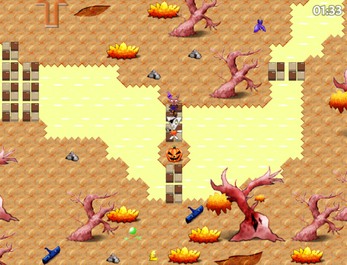